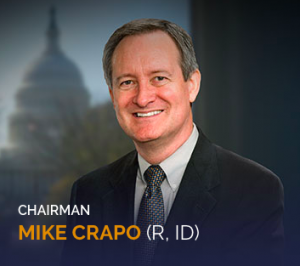 The text of Chairman Crapo’s remarks, as prepared, is below.

“Today, we will receive testimony from Federal Housing Finance Agency (FHFA) Director Mel Watt on the status of the housing finance system.

“Fannie Mae and Freddie Mac have now been in conservatorship for close to nine years.

“In September 2008, then-Treasury Secretary Hank Paulson famously described the conservatorships as a “time-out.”

“Today, Fannie and Freddie, along with FHA, continue to dominate the mortgage market.

“Approximately 70 percent of mortgages are backed by the federal government.

“While Fannie and Freddie are currently earning profits, if the housing market experiences a downturn, taxpayers could again be on the hook for billions of dollars.

“The status quo is not a viable option.

“A housing finance system dependent on two government sponsored enterprises in perpetual conservatorship is not a sustainable solution.

“Taxpayers today bear too much risk, and the government plays too big a role in the mortgage market.

“A number of groups have released proposals for reform in recent months, including MBA, ICBA, the Milken Institute, several co-authors writing jointly for the Urban Institute, and many others.

“The Committee is considering all of these proposals, as well as other ideas about what the future system should look like.

“As conservator of the GSEs, FHFA is obligated to conserve and preserve the assets of Fannie Mae and Freddie Mac.

“FHFA has undertaken a number of initiatives in recent years, including some that began prior to Director Watt’s tenure.

“One significant undertaking is the creation of the Common Securitization Platform (CSP).

“The Platform was originally intended to function like a market utility – independent from the enterprises – that would be used to issue both agency securities and private label securities.

“The Platform has instead been developed specifically for securities issued by Fannie Mae and Freddie Mac.

“One important question as we embark on housing finance reform is whether we should utilize the CSP, or consider other alternatives, such as expanding the Ginnie Mae platform.

“Another important development in housing finance is the increased transfer of credit risk from the enterprises to the private sector.

“I encourage FHFA and the enterprises to continue to experiment with different forms of risk transfer, including both front end and back end structures.

“Transferring credit risk away from the government and into the private sector is essential to protect taxpayers and build a more robust and sustainable market.

“Increasing the amount of credit risk borne by the private sector will be a critical component of housing finance reform, regardless of which direction the Committee ultimately decides to take.

“I encourage Director Watt to consider other policy options to incentivize further private sector participation and to help facilitate the transition to a new system.

“Housing finance reform remains the most significant piece of unfinished business following the financial crisis, and it is important to build bipartisan support for a path forward.

“Three years ago, seven Republicans and six Democrats on this Committee voted in support of a comprehensive housing finance reform bill.

“A key priority this Congress is to build on that bipartisan legacy and pass legislation that will create a sustainable housing finance system for future generations.

“I look forward to working with you, Director Watt, and your staff at FHFA throughout this process.”

The DC Strategies Group was founded in 2010 and is led by Mike Chapman and Jeff Kramer. Combining decades of policy experience in the nation’s capital, Chapman and Kramer bring a unique perspective to public affairs advocacy that includes business development and communications expertise. DC Strategies represents corporations, non-profits, NGOs and individuals on a wide range of federal regulatory and legislative issues directly impacting them.
View all posts by DC Strategies →
This entry was posted in Uncategorized. Bookmark the permalink.