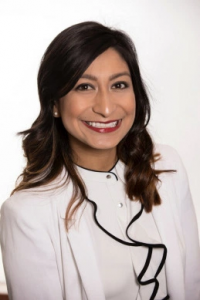 Most recently, Martinez served on Massachusetts Governor Baker and Lt. Governor Polito’s Inaugural Committee as senior staff on the political and finance team. Prior to the committee, she was the political director for the Baker-Polito re-election campaign, which won the election with over 66 percent of the vote and raised a record-breaking $32 million dollars. Martinez led successful coalitions across the state, and worked with the Republican state party on GOTV efforts. In addition, Martinez assisted her team with endorsements and political events.

Prior to these roles, Martinez worked at the U.S. Chamber of Commerce’s public policy shop, which doubles as the U.S. Chamber Litigation Center for three and a half years. As a manager she assisted in reviewing annual testimony and Hill letters on a broad range of policy topics centered around small business advocacy. Martinez stepped in to help her team in analyzing LD-2 and LD-203 lobby report data for the entire organization over a two year period. In this role she created lobby report correspondence for mass communication distribution, and acted as the point of contact for internal databases. She also was the point person for staffers to review, process, and execute contracts. In her free time, she worked to execute logistics the Chamber’s largest attended event, the Small Business Summit.

As a grassroots organizer, Martinez was deployed to help elect Jack Martins for County Executive in Nassau County, New York. She also assisted in phone banking, and on the ground efforts to elect Congresswoman Karen Handel in Georgia’s 6th Congressional district.

In addition to her political work, Martinez has experience in executing goals for corporate clients. As a consultant for the Latino Coalition, Martinez provided PAC benchmark goals, timelines, and membership retention plans. As an international consultant and was sent to Africa as a Gray Areas LLC researcher for small business development. There she researched regulations, trade relations, GDP analysis, and cultural barriers, directly to the client President, Basil Gray.

Martinez is an alumna of Johns Hopkins University and the University of California, Santa Barbara. Originally from Greeley, Colorado, Martinez maintains her strong California political roots and currently commutes between Boston, Massachusetts and U Street in Washington, D.C.