Remarks by the President at JOBS Act Bill Signing 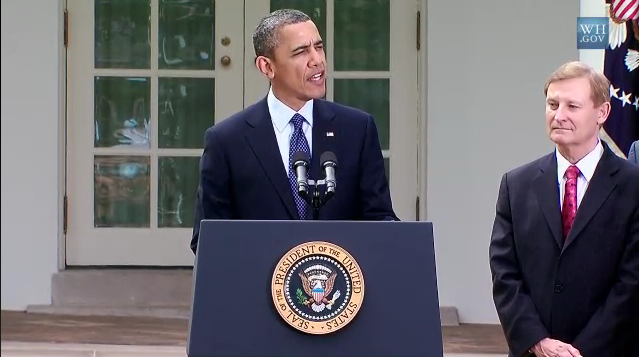 THE PRESIDENT:  Thank you. Hello, everybody.  Please, please have a seat.  Good afternoon.  I want to thank all of you for coming, and in particular, I want to thank the members of Congress who are here today from both parties, whose leadership and hard work made this bill a reality.

One of the great things about America is that we are a nation of doers — not just talkers, but doers.  We think big.  We take risks.  And we believe that anyone with a solid plan and a willingness to work hard can turn even the most improbable idea into a successful business.  So ours is a legacy of Edisons and Graham Bells, Fords and Boeings, of Googles and of Twitters.  This is a country that’s always been on the cutting edge.  And the reason is that America has always had the most daring entrepreneurs in the world.

Some of them are standing with me today.  When their ideas take root, we get inventions that can change the way we live.  And when their businesses take off, more people become employed because, overall, new businesses account for almost every new job that’s created in America.

Now, because we’re still recovering from one of the worst recessions in our history, the last few years have been pretty tough on entrepreneurs.  Credit has been tight.  And no matter how good their ideas are, if an entrepreneur can’t get a loan from a bank or backing from investors, it’s almost impossible to get their businesses off the ground.  And that’s why back in September, and again in my State of the Union, I called on Congress to remove a number of barriers that were preventing aspiring entrepreneurs from getting funding.  And this is one useful and important step along that journey.

Here’s what’s going to happen because of this bill.  For business owners who want to take their companies to the next level, this bill will make it easier for you to go public.  And that’s a big deal because going public is a major step towards expanding and hiring more workers.  It’s a big deal for investors as well, because public companies operate with greater oversight and greater transparency.

And for start-ups and small businesses, this bill is a potential game changer.  Right now, you can only turn to a limited group of investors — including banks and wealthy individuals — to get funding.  Laws that are nearly eight decades old make it impossible for others to invest.  But a lot has changed in 80 years, and it’s time our laws did as well.  Because of this bill, start-ups and small business will now have access to a big, new pool of potential investors — namely, the American people.  For the first time, ordinary Americans will be able to go online and invest in entrepreneurs that they believe in.

Of course, to make sure Americans don’t get taken advantage of, the websites where folks will go to fund all these start-ups and small businesses will be subject to rigorous oversight.  The SEC is going to play an important role in implementing this bill.  And I’ve directed my administration to keep a close eye as this law goes into effect and to provide me with regular updates.

It also means that, to all the members of Congress who are here today, I want to say publicly before I sign this bill, it’s going to be important that we continue to make sure that the SEC is properly funded, just like all our other regulatory agencies, so that they can do the job and make sure that our investors get adequate protections.

This bill represents exactly the kind of bipartisan action we should be taking in Washington to help our economy.  I’ve always said that the true engine of job creation in this country is the private sector, not the government.  Our job is to help our companies grow and hire.  That’s why I pushed for this bill.  That’s why I know that the bipartisan group of legislators here pushed for this bill.  That’s why I’ve cut taxes for small businesses over 17 times.  That’s why every day I’m fighting to make sure America is the best place on Earth to do business.

But I’ve never been more confident about our future.  And the reason is because of the American people.  Some of the folks beside me here today are a testimony to that.  Day after day, they’re out there pitching investors.  Some meetings go well; some meetings don’t go so well.  That’s true for me, too.  (Laughter.)  But no matter what, they keep at it.  And who knows, maybe one of them or one of the folks in the audience here today will be the next Bill Gates or Steve Jobs or Mark Zuckerberg.  And one of them may be the next entrepreneur to turn a big idea into an entire new industry.  That’s the promise of America.  That’s what this country is all about.

So if these entrepreneurs are willing to keep giving their all, the least Washington can do is to help them succeed.  I plan to do that now by proudly signing this bill.

Thank you very much, everybody.

The DC Strategies Group was founded in 2010 and is led by Mike Chapman and Jeff Kramer. Combining decades of policy experience in the nation’s capital, Chapman and Kramer bring a unique perspective to public affairs advocacy that includes business development and communications expertise. DC Strategies represents corporations, non-profits, NGOs and individuals on a wide range of federal regulatory and legislative issues directly impacting them.
View all posts by DC Strategies →
This entry was posted in Legislation. Bookmark the permalink.